When my parents got married in the early 50's my maternal grandparents gave them a parcel of land next to theirs as a wedding gift. My dad, being a carpenter by trade, slowly built the house himself (mostly). He finished off the basement first and we lived down there for about 8 or 9 years.

We had a living room, kitchen, dining room, bath, laundry/furnace room, a tiny bedroom for two of my brothers, the baby's crib was in my parents' room, and my two sisters and I shared a hole-in-the-wall sized room with a triple bunk bed (I had the bottom cuz I was youngest)! The kitchen, living room and dining room all had those big linoleum squares over the cement floor - cold and hard! (EDIT: These first two photos are not my own) 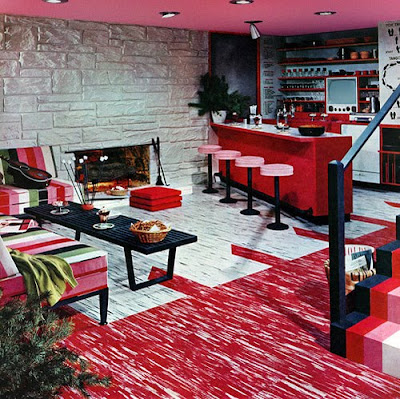 Around 1966 or 1967, dad finally started finishing off the "upstairs". The kitchen area was graced with knotty pine walls, the master bedroom and the boys new rooms were treated to paneling! We girls remained in the basement - we were teens and didn't need the supervision at night (or so they thought!). 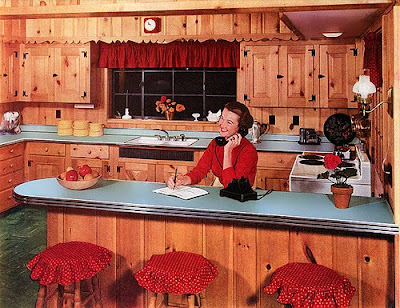 The upstairs kitchen remained unfinished for a few more years (except for the knotty pine) and it made an excellent playroom for us kids. I fondly remember my brothers and I (a tomboy) playing hockey in that room with a ball instead of a puck. I have no idea why my parents allowed us to do that to their new pine walls!

Now, the upstairs living room remained unfinished (just studs) for quite a few more years. Mostly because that's where my dad stored his airplane! He had a single engine plane, took the wings and tail off, and it lived in the house for a long time until he sold it! Our friends thought we were so cool! This is a pic of five of us in it at the town airport, where we would get to take rides in it on Sundays. I'm on the left. (It's a scan of a scan of the original grainy photo.) My dad left home here in Massachusetts when he was 16, in the 1920's, and went out to Kansas. He joined one of those flying circuses where he wing-walked on biplanes!

Just a few memories from my childhood!
at 6:14 PM

Fun to look back to our childhoods. Knotty pine, oh how I remember that look. ;-)
~ sarah

You just took me back to my grandma's kitchen in their beach house on Rehobeth Bay. That knotty pine kitchen looks so much like it. I remember all the great things she fixed. Steamed Maryland Blue Crabs with old bay seasoning, after a day of crabbing off the balkhead out back. Silver Queen White Corn, Crab Imperial, making blackberry preserves from the wild black berries we picked. Making homemade ice cream with fresh peaches. Wow I can't believe all that's coming back just seeing that kitchen.

Thanks for sharing!
Chris

Great, interesting story. I love knotty pine. I have it in my house, not alot, just right. Thanks for sharing!

The knotty pine is beautiful! I remember our cabin at the Lake of the Ozarks, Missouri,when I was little up until the seventh grade. I sure miss it! Thanks for sharing. Love your blog.

That was a wonderful story, thanks for sharing!!!Our first house when we got married was a darling Cape Cod, and one of the upstairs bedrooms was in a dormer and it was all notty pine, my son loved that little room!!! hugs...cleo

Wow! What wonderful memories. An airplane in the living room? That would be so cool! Did he ever finish the entire house? I'd love to hear more stories!

Hello,
Waw, what a story. No ordinary family! I like you're photo's. Specially the first one, with the pink, red and black. Today that would be very HOT. Wish you a nice sunday.
Dutch greetings with heart&soul,Sil

This was the most fun post! I love the memories of your home and growing up there. How wonderful to have such a large family. What a cute as can be photo of you all. Thanks so much for sharing! Elizabeth

This is such a fun story. Your house must have been the one that all the neighborhood children liked to come to!

I can relate to the time to finish a project but your mom must have been the most patient person on earth...

I enjoyed reading your reminiscences, Sue! When we bought our home 35 years ago it had a knotty pine kitchen and paneling that went up the ataircase. We painted over the paneling and replaced the kitchen (which is now outdated again..lol..as it is a 1980's design)

How cool that you took frequent airplane rides as children! That must ahve been exciting!

Sue,
Knotty pine and linoleum! Who could pass up such a post??
What an interesting story of your childhood. Great pictures, too!

Oh those were the days! Love the photo of you and your siblings. So cute! laurie

Wow. Your dad sounds like one interesting dude. And I love the look of knotty pine. I wish it would come back in style.

You didn't give a date when you were living in this home, but it brought back memories of living in a home in Midland, Texas in the early 1950's that had knotty pine walls. It was so "in"!!
Love your story!
Karen
Ladybug Creek

That's fascinating about your dad.