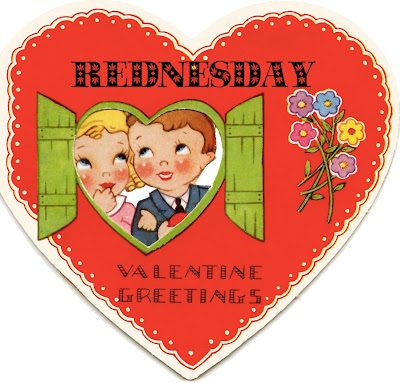 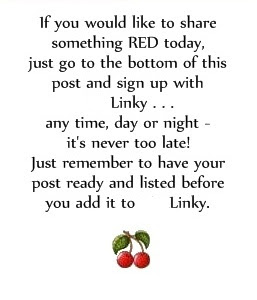 I give up! I think I'll change the name of Rednesday to "SnowDay"! For the third week in a row, we're having a major snow storm on a Wednesday; well, this week it's a two-day storm on Tuesday and Wednesday. What did we ever do before computers!

Methinks this guy won't even bother to come out of his burrow this year! 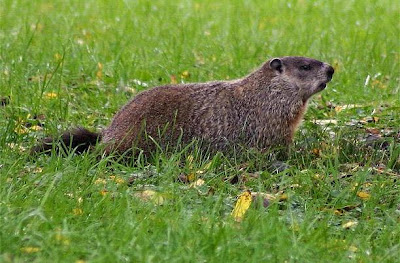 I'm all cozied up to my virtual fireplace (which is my Africam live cams, where it's a toasty 86F/30C right now!), ready to show you my reds ~

Mister got me this cute little Chinese teapot a few weeks back at the thrift shop. It's glowing with red spots (not pink, mind you!). 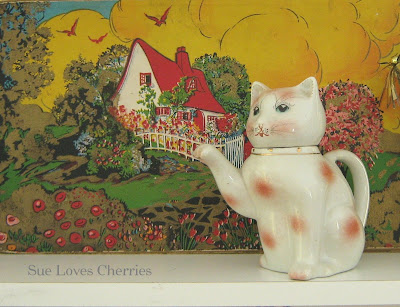 He picked up this very dirt-embedded crazed pitcher last year. I don't think I've shown it yet. No markings, but it reminds me of some Homer Laughlin ones I've seen. The container to the right is the shape of one of those refrigerator dishes, and it holds my oatmeal and Cream of Wheat packets. 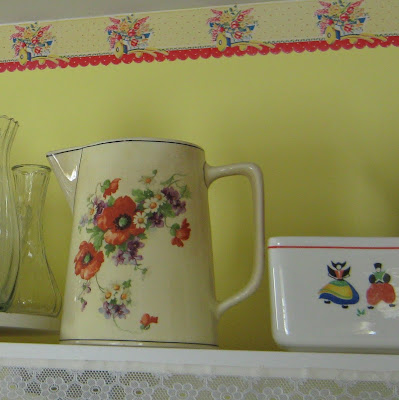 Lots of red here ~ coleus and sweet potato vine cuttings that I've been too lazy to pot up. Also a few plants that I'm trying to have hang on until Spring (if it ever gets here!). This is the side of my pantry shelves that's about 3 feet/1 meter from the South-facing back door. 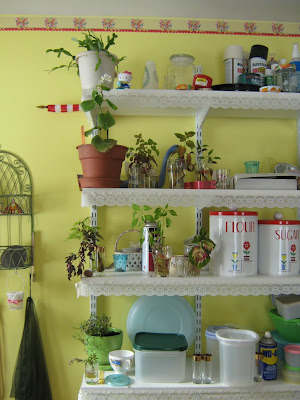 Last photo ~ two metal sifters. The one on the left, a Bromwell, has a red knob. The smaller one on the right Mister picked up at a thrift store - they were going to throw it out! So he got it free! I love the shabby paint and the advertising. 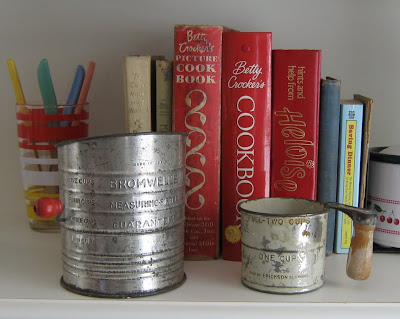 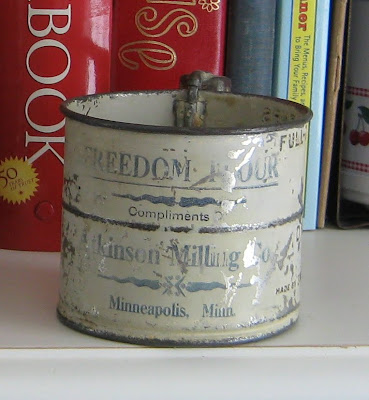 Oh my gracious - talk about some fun family memories for this baby boomer. I so recognized the sifters - we had twins of them way back whennnnn! :)

My favorite of all these cute reds, though, is the pitcher with the flowers. Sooooo pretty. I think my grandkids would prefer the groundhog and the unique kitty cat teapot though. And I'll have to look up Africam live cams. My senior mom is missing her gardening and I bet that would give her something fun to see. Thank you for all the fun and RED ideas. :)

Oh Sue! I'm sitting here surrounded by grandsons and enthralled at what we THINK is an elephant hovering just at the edge of the trees. Thank you so much for letting us know about it! Any suggestions on which is best to watch in the middle of EST daytime - which is Africa nighttime? Thanks again! :)

We're about to have a doozy here too. 20" or more. Yikes!
Love all of your reds today, especially the little red cottage behind the kitty teapot. It looks just like my dream cottage, and I want to live there! Love your valentine header too, and the graphic for this week is SO CUTE!
Happy REDnesday!
Carol

Sorry that you guys are all getting slammed with weather. That is so sweet of your hubby to gather things for you as he comes across them. I love your kitchen shelves and everything on them.

Gosh keep safe and warm. Post pictures for those of whose who never get snow:)

It is rainy and icky here! I am loving your reds, especially that cat teapot! So cute!!!

Thanks for hosting Rednesday! I just love your yellow kitchen with the red accents! My kitchen is yellow with red accents, too! I've been wanting to link here, but was waiting until I had a red post!
Blessings,
Janet

What a thoughtful hubby to search out redness for you. That little Chinese teapot is darling and the sifters are great finds. Thanks for hosting REDnesday. It's always fun! ~ Sarah

I have a sifter similar to yours but mine is made in Canada. Love the cat teapot, I am a sucker for anything with cats.

Hi Sue! Well, Dad's back in the hospital, I'm stuck here iced in, our DISH just went out...guess that means I'll haveta talk to Jim....hehe. I wish Calgon or aliens, or somethin would just take me away...........
I'd love to come see your reds in person, but no offense..it'd better be take me to someplace warm and sunny,

I really love that pitcher. The sifters are really cool, too. Your hubby is so nice. We're iced under. Can't go anywhere. Just stuck in the house for awhile.

I think you are SO RIGHT about the groundhog. My sons birthday is tomorrow and "HE'S Our Own Personal GroundHog and he says Winter stays for 6 more weeks)". I LOVE ALL your goodies but my VERY FAVORITE has to be the kitty cat teapot! LOVE IT!!!
Thank you for the fun party. AND It's your month, Beaming in REDS!!!
Hugs, Donna

I especially love the sifters, especially the little one. :))
Thanks for hosting.

The Charm of Home said...

You have a nice collection of vintage cookbooks! Love those.
Sherry

You the snow has been coming down for several hours how. Between the snow and the wind, we had a hard time opening our door to get out. Huge snow drifts already.
what a fun teapot and pitcher! I really like them both! Keep warm!

Love all your red treasures, especially those cookbooks!!

I love all of your red...and especially love the old red cookbooks. I've joined you today for the first time.

Have a wonderful day,
Stephanie ♥

My pictures didn't show up to link in, so I had to pick my badge. Have a great Wednesday and thanks for having us.

Hi Sue,
Thanks for reminding me about Groundhog Day...it had completely slipped my mind! I agree, he won't even bother coming out this year!!!
I love your shelves and the sweet lace lining. Everything looks so cute and adorable!!
Happy Rednesday!!!
Ann
@
The Tattered Tassel

Well you've probably highlighted this before but I love your wallpaper border! ♥

Such a wonderful post!
Sweet man to bring treasures home for you. Our thrift store will not give away anything. They'd rather toss and break items. Makes me see RED.
As long as I am snowed in I will spend the day visiting links. (Oh, poor me)

I am in love with all your wonderful reds. I love the shelves too. I like the lace edging. My mama used to do that with her shelf paper. I think you could buy shelf paper with pretty scalloped edging back then.

I just love your shelf and the beautiful vignettes you made on each one...

We are right there with you...a foot of snow yesterday and will be off school again tomorrow. Brrrrrrr. ~Kelly

LOVE the pantry shelves and the container with the dutch kids, just gorgeous!

Hi Sue,
I didn't have anything for Rednesday this week, but I wanted to come over to say "hi!" I hope my Valentine arrived!
XO

Sue, I'm considering dictionaries next week ... are you in? :>) Thanks for the visit!

Thanks for stopping by over at my place - I always enjoy visiting yr lovely blog!

Have a great weekend!

You have some amazing collection of red items.

I just hope to see a groundhog soon, and get to spring already! Love those flour and sugar canisters you have there!

As always , you have wonderful things to share !
Blessings,
~Myrna

So sorry to have missed this Rednesday, but there was a computer disaster here. The new one arrived yesterday so hope I will be back and blogging my tomorrow or Monday. I love your old sifters. I still have my mother’s, and I will be 72 on Monday. It is old just like I am!!!!! I love that your hubby is on the lookout for thrift finds for you. That is just tooooo cute. Hugs, G

Love those sifters and the Tea pot!!