I got a new cupboard yesterday. Mister's mom was getting rid of it and ask him if he wanted it. He brought it home saying it would go in the barn. I said, "Uh, uh! It's going in the kitchen!" And, it did! 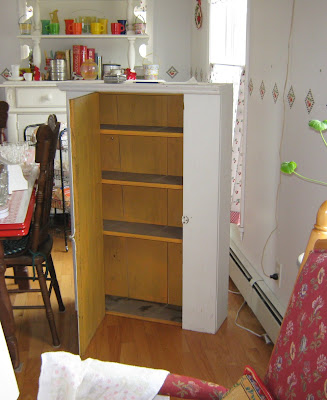 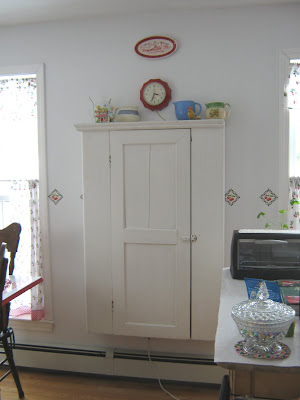 The inside required lots of scrubbing clean because I think it used to be in a garage or somewhere - layers of dirt and grease! So, I put down some shelf paper after cleaning. Mister had moved the island to one side and the table to the other while hanging the cupboard, and we like them that way! So now we have two little "rooms" out of one! 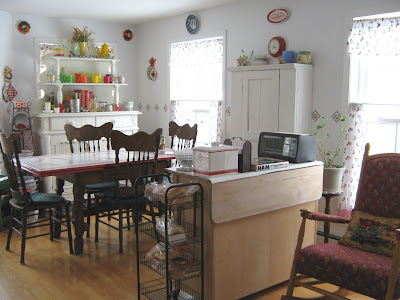 I was standing against the V of the counter to take this pic. The fridge is on the left end of the counter and the stove on the right. It's a long kitchen, about 15 feet. It has an entrance to the living room and our front door to the left of this photo, and a doorway to the right in this photo that has a mini hallway with the side door, stairway, and my laundry/craft room door. So the room is cut up diagonally making it hard to position the table and have clear walking space, too. This will last for a while - until I get the moving bug again!
at 4:23 PM

That's one fun shelf and well worth the effort!! Enjoy.

I just love your new cupboard. You're right...it would have been wasted in the garage! Nice job...
Cheryl at My Sister's Cottage

sure looks like it was made for that spot. :)

It looks perfect lifted off the floor. I love the detail on the door. Perfectly placed in the kitchen...smiles...Renee

Wow! I love this and you hung it on the wall. I didn't realize it was a shelf - too cute.
Be a sweetie,
Shelia ;)

Great cabinet...looks great where you've put it! I'm sure you will enjoy the extra storage space.

I love old cabinets like that. That is a great find and looks so cute on the wall.

I am so glad you grabbed that cabinet for your kitchen. I love it!

I like the farm-housy-ish look! A lot of work. Nice.

Speaking of April Fools, I did an April Fools prank on some of the 6th graders in my school. Video now on my blog.

What a great piece and love where you put it!!!! You have some wonderful re-used pieces Sue!

it's wonderful. I can't believe your hubby was gonna put that in the garage...great save and it looks so nice! Mica

looks great! I have one I love that my husband had at his parents house and just could not understand why I wanted it!

Yay! And you didn't even have to paint it! Your kitchen looks great sue. I love it! ♥

Looks great, complements your buffet piece on the other wall nicely.

The cupboard is very farmhouse-y-ish, and it looks like it's always been there! And I just love white kitchens, because then all of the accessories really get to shine. Yours is beautiful!

I just LOVE the last pic. Of course, I had to enlarge it and just stare and ooooooooohhhhh and yaaaaaaaaaaaaaaaa..It made my heart smile Sue..I love ya girl and just love visiting you. I pictured myself sitting in that rocker with a cup of coffee chatting away to you...((hugs))

What a nice surprise for you and such a lovely addition to your kitchen,

You have a lovely room.