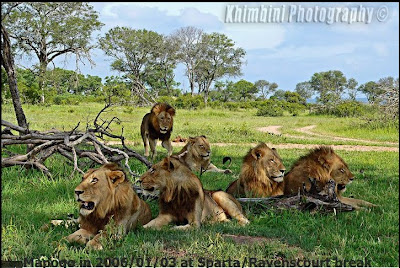 As most of you know, I watch Africam live on my computer every day (see here). Today I'm going to introduce you to The Mapogo Pride, aka the Mapogo Mafia, South Africa's infamous gang of 6 male lions (5 of which are brothers), that have dominated the Sabi Sand Game Reserve for nearly a decade. (The article below is from the Africam website.) 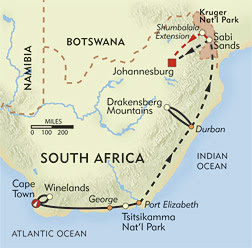 The Mapogos may well have been the most infamous lion pride in all of Africa. They were unique in that they were a six male lion coalition (five of which were brothers) that joined together nearly 10 years ago, and have since dominated one of the wildest parts of Southern Africa, the Sabi Sand Game Reserve.

Named after a South African security company sometimes said to have harsh and questionable methods, the Mapogos were able to control such a large region through size, intimidation, strength and fear. - not to mention attempting to kill nearly every single male lion they came across including cubs that were not their own. If the females attempted to protect these cubs, they got taken out as well. It is estimated that they have killed well over 60 lions throughout their reign, and they have even been known to eat them afterwards.

They also maintained control through their somewhat unorthodox mating practices. As where a normal pride would have one dominant male for its females in a given territory, the Mapogos would mate with many females in multiple prides across their entire massive region. This seemed to be an attempt to make sure that any lion cubs growing up in the area were from their bloodline.

One well known account of the rise of the Mapogos concerned a rival pride that was a coalition of two males known as the Nkuhumas. The two males had been mating with females from a pride that the Mapogos also had a vested interest in. The brothers dealt with this threat directly, as was their way. They killed one of the male lions, then chased off the other, mated with the lionesses and killed some of the Nkuhuma cubs. There were many reports in the days following the assault of wounded Nkuhuma lionesses and cubs that had been killed but the total death count is unknown.

As far as prey goes there is almost nothing beyond their reach. They have been known to take down full grown male giraffes, rhino, hippo and massive buffalo.

Even powerful coalitions sometimes have one particular member whose mere presence creates legend. For the Mapogos this would be none other than the notorious “ Mr.T”, also known as “SaTan”. His mohawk style mane has been the last thing seen by many a creature. To observers, he is known for being almost intentionally cruel and at the same time completely indifferent to the prey he leaves in his wake - including other lions.

It is easy to see in this brief account of their history that the Mapogos far reaching power seemed unshakable. However, like all great empires, even theirs could not last forever. It was rumored that the first was taken in a stealth attack at the water's edge by a crocodile a few years ago. At that time the remaining brothers were beginning to separate into different territories in the area, but would come together from time to time if a new threat had to be dealt with. 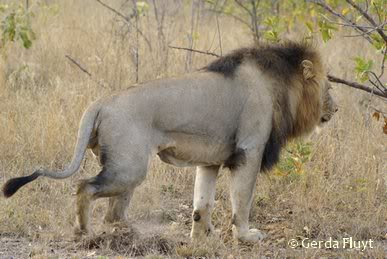 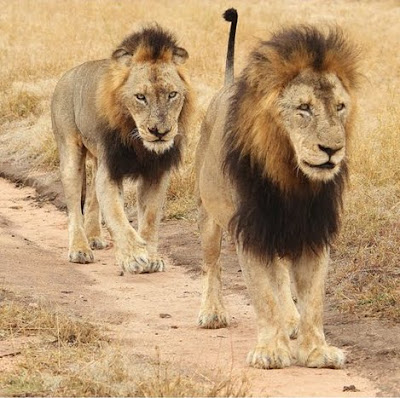 Two of the Mapogos, “Kinky Tail”, and “Mr. T”, ventured away from the other three quite awhile ago, perhaps sealing their fate. Rumor had it that there was a new coalition in the area. It was thought to be a group of 4 males that had come from the Kruger National Park. This group has since been named "The Majingilanes" which means to march in military like movements. They were younger than the Mapogos, and were looking to try and claim a piece of the Sabi Sand.

Coming upon one of these new Majingilane lions on its own, Mr. T and Kinky Tail attacked and killed him with grizzly vigor. Unfortunately for the Mapogos, this would not be enough to scare off their new rivals, and within hours the remaining Majingilanes moved in for revenge. By the next day, Kinky Tail was dead...meeting a demise he had proudly given to others. 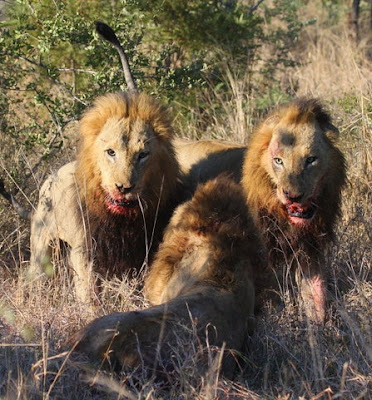 Kinky Tail and Mr. T with the Majingilane

Mr. T was thought to be fatally injured, but lived up to his legend by escaping and heading south to meet up with his remaining brothers. There is no doubt that increased age and waning strength is dethroning the once fearless Mapogos. For all intents and purposes their reign as the unstoppable rulers of the Sabi Sand is over.

How long will it be before the remaining Mapogos are merely shadows in the dark? How long before we have only the grim tales and ominous photos left to remind us of their empire? Given the power and focus the Mapogos have had and still fight for, their stories will resonate long after their lives have faded away.

As luck would have it, that fight between Mr. T and Kinky Tail with the Majingilanes last summer, happened right near the Nkhoro Lodge, where one of the Africam cameras is located. Unfortunately, we couldn't see any of the action but could hear all the fighting going on. Actually, I'm glad we couldn't view it because it was extremely loud and quite unnerving! The above fight photo was taken by one of the Nkhoro rangers.
at 11:04 AM

Wow, that was fascinating, I really did skip ahead to make sure Mr T survived.

Would love to have you come by my one and only blog link party at DearHelenHartman.blogspot.com