Do you like any of these: arbors, summerhouses, gazebos, or pavilions? I have a book called The Classic Garden by Graham Rose, that has a chapter on Arbors and Retreats, and I'm enjoying it immensely! These structures are so dreamy! I scanned a few pages of illustrations for you, so you can dream with me! 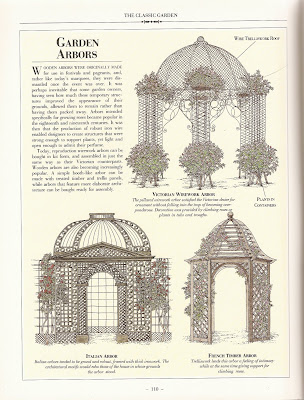 Here's some of what the book says about "Inside the Victorian Summerhouse":

"Normally, reading was an activity confined to the library, study or drawing-room. Taking tea was a ceremony that usually took place in the parlor. Therefore in the belle epoque [this time period], merely reading a book or taking tea in a summerhouse had something akin to heresy about it and it induced an exciting sense of mischief. This was amplified because the weather in those northern regions where summerhouses were most frequently built was only rarely kind enough to make using them a pleasure. 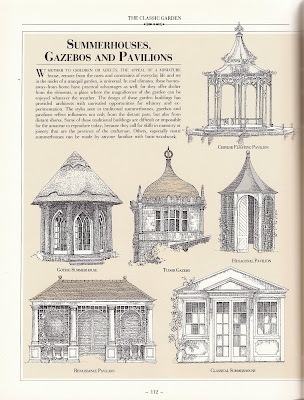 "But even when the decision to use the summerhouse had been taken, the ripple of anticipation of a more relaxed feast in the garden was mitigated by the fact that a large element of ceremony still had to be preserved. Flawless, well-starched linen would cover the table. Genteel cutlery and crockery would be used and a maid in a pinafore and cap would ensure suitably deferential service. 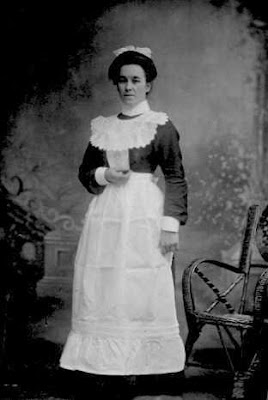 (photo from sissymaids.groupsite.com)
"To stage such a tea party, a summerhouse had, in many ways, to be designed to resemble a parlor. It had to be large enough to seat up to eight people in some comfort. So that they could all enjoy the garden view, it had to have large windows on most of its sides. In very hot weather it had to be suitably ventilated, which meant that the windows had to be capable of being opened to create a through draft. Adjustable roof-ventilation was often provided to allow rising heat to escape. Under adverse conditions on windy days the summerhouse had to be suitably snug. Apart from the main table and chairs, there also had to be shelf space for such paraphernalia as kettles heated by spirit lamps to provide hot water to replenish the tea pots. By modern standards, tea in the Victorian summerhouse was hardly a spontaneous affair." 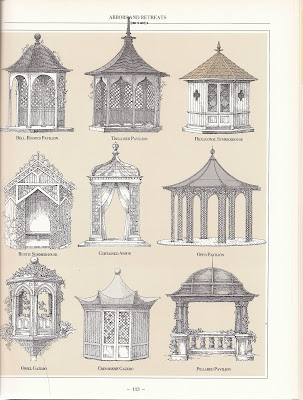 Phew! That sounds like a lot of work to me! Give me my Diet Pepsi and a sandwich any day! But, it would have been wonderful if you had the servants to do everything for you. Which is your favorite of these illustrations? I think mine is the Gothic Summerhouse - love those windows!
at 12:48 PM

I have to choose? They're all wonderful! But I guess my favorites are the Victorian Wirework Arbor, the Chinese Floating Pavillion and the Rustic Summerhouse. Thanks for sharing!

Love the look of them but yea, I'll take a summer nap instead.

I always liked the thought of a summerhouse arbor in a secluded area.. .. I love to read where it's quiet

I love the "Bell Roofed Pavilion". Simple and open. You're right, those Victorian folks made everything complicated. I love the look of that time though!

I have always wanted a gazebos in my backyard.