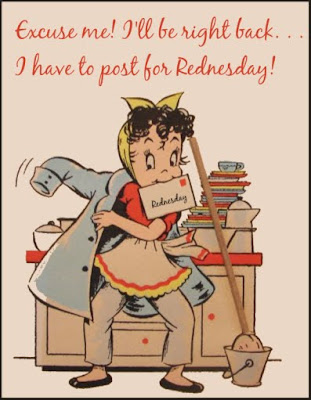 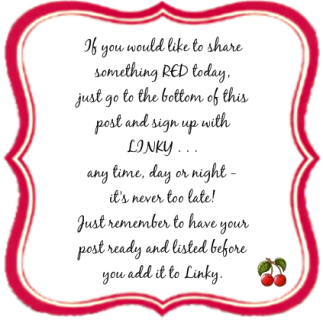 Hello, and welcome to Rednesday! Believe it or not, I've never had a cherry soda in my life! Not on purpose, I just never did. I recently was googling something about cherries and a vintage bottle cap came up. Great design, so I looked for more. Who knew there was such a nice variety of cherry soda graphics out there for me to enjoy! I'm sure there's many, many more than these ones, too! I threw in the Pinky soda one for the name's sake - my maiden name being Pink! 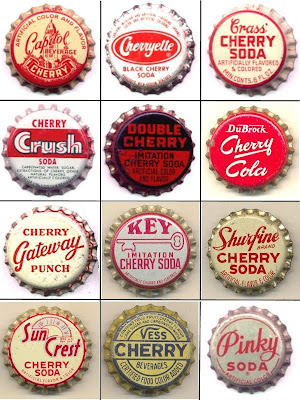 A bit of soda trivia for you:

* * * * * * * * *
Monday morning Mister's maternal grandfather passed away - Thomas Alton Stewart, originally from Nova Scotia. He was a pastor, and even married Mister and me! For about the past 15 years, he lived down the street with Mister's mother, and he died at the ripe old age of 101! 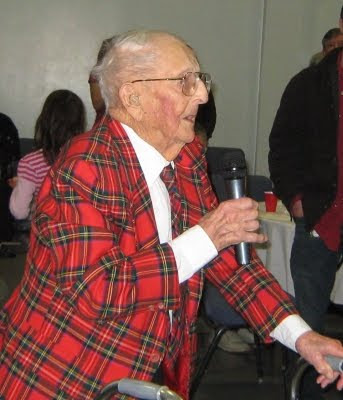 "Grampy" Stewart at his 100th birthday party last year.
He lived a great life, had many friends, and was a great story teller! He drove his car until he was 100 (complaining about all those old people on the road that drove too slow!) and stopped only because his hip was getting bad. This past week he just wanted to go home and be with his Lord. What a homecoming party there was in heaven on Monday morning!

Sue,
Please tell your Mister that I am sorry about his Dad....but I can just imagine the party they had as he came thru those pearly gates! My gosh, he had to have so many there to welcome him!!!! Praise God! :):) Love the bottle caps!!!! All red and white and red and cream and red and...well you get the drift....Have a good day!

I wish they brought back the glass bottles. They just taste better. Although the best way to drink cherry cola is from the fountain, no doubt.

I am sorry for your loss. It's never easy to say good-bye, even when we know they are ready to go Home. It sounds like he was a wonderful man.

What a sweet example of leaving a great legacy he has set for your whole family. I am praying for comfort for all of you and praising God that he is safe in heaven. :) And I'm with Cheeseboy - the fountain is the yummiest! Tho I'll take Cherry coke any which way :)

My condolences to you and your family on the loss of Mister's Grandfather. But how wonderful that he lived so long, and was able to share so many stories. I wish I had written down all of the stories my grandparents had shared. People of that generation are such a wealth of information for what times were like back then!

How wonderful to share life with such a great man! Your misters Grandfather looks like he would have been wonderful to know. Love your bottle caps! Debbie

Candy @ The Little Round Table said...

Condolences to your family, what a great long life he had.

Of course Mister and family will miss his Granddad but what a wonderful life he had.

I enjoyed your post about POP! It's not "soda" to me I'm from the Mid-West.

How bittersweet to celebrate Grandpa / Great Grandpa's life, and to miss him.

And on a lighter note: you never drank "red pop" ...? You must not have grown up where I did.

My condolences to your family for your loss.

Thank you for hosting. I am a new friend and follower and first time party-goer. I just can't resist the red any longer...it's my favorite color.

Thanks so much Sue for all information about bottle caps. I never ever give a thought. You did a lot of research on this. I am sorry about the family's loss. At least, sounds like he lived a long and fruitful life.

I love those coke caps collection! They are valuable vintage..

I sooooo want one of thoe pinky soda bottles or caps-any ideas where to get one-I would be sooo in love with it!

What a fun set of bottle caps. Love the graphics also. So sorry for your family's loss. He sounds like a wonderful man and had a great life and I'm sure there was great rejoicing when he went home! hugs to you. Linda

Wonderful bottle caps! I am sorry for your loss. What a precious soul "Grampy Stewart" was. He looked so cute in his Royal Stewart blazer. He's back home now, wrapped in the arms of God's Love. My post is a re run this week ~ I'm starting to run out of red!!

Lots of love,
Susan and Bentley

Sue, I am sorry for your loss. It sounds like he was a blessing on earth.
Your bottle cap collection is amazing! What fun!

So sorry about your Mister's granddaddy..but what a beautiful testimony of his life...I love all the history of the colas..hope you hav a great week sweetie and thanks for hosting such a neat party...Picket

how did you get that cartoon? so customized, yay!

So sorry for your loss, Sue. What a blessing for him to have reached such a birthday.

Thank you for hosting.

I love your soda facts.:)
Thanks so much for hosting..

He had lived a fruitful life, he can rest and return to his Father in heaven.

Sue, rednesday is my favorite day of the week...love these posts...smiles...Renee

I just want to say that I am totally jealous that you had the last name of Pink!! How neat is that!?!?!?

I think Thomas in that jacket is a perfect Rednesday pic of all times Sue..Sorry for the loss of this beautiful man, but also praising God that he is home...and I'm quite sure is having the time of his life!!!Drove his car..lol..at 100 years old..WOW...He definitely lived while he was here didn't he? So neat to read he was Canadian at one time....love it!!

Wow that is awesome. i am late today but hope you can visit...See you.

I love the bottle caps and soda history . I am sorry for your husband's lost ; Your tribute to his grandfather is beautiful and his life was a beautiful testimony also.
Blessings,
~Myrna